Home » All Activities in Puerto Rico 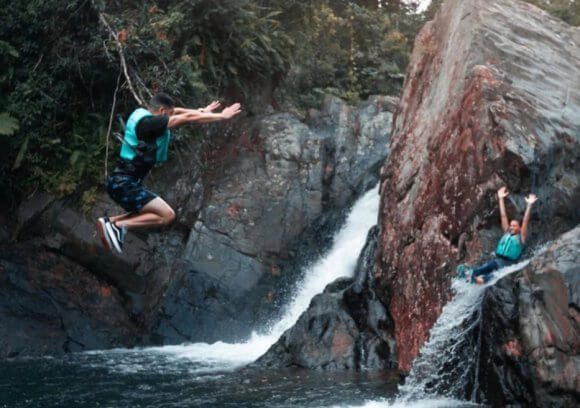 Island Journeys provides El Yunque Rainforest tours that offer the perfect combination of hiking, nature, water activities, fun and relaxation. An interpretive hike lined with beautiful flora and fauna brings guests to an area of the forest where they can swim in natural pools, refresh in waterfalls, slide down an exhilarating waterslide, rope swing into the river, jump from different rock formations, and enjoy fresh local fruit with a view. read more 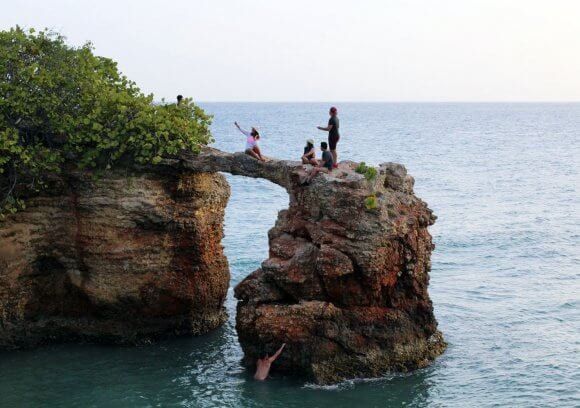 West Side Destination offers evolved and refined adventures to Puerto Rico's unadulterated areas and wonders. Discover the secrets of Puerto Rico through their unique hiking and caving tours - adventures for all skill levels!read more 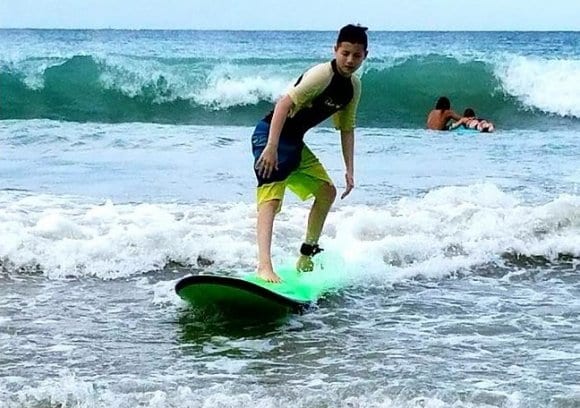 At Pine Grove Surf Club you are always treated like family. The Nogales brothers have over 30 years of experience in the water, and pride themselves in providing their customers the best experience possible whether you are surfing , snorkeling, paddleboarding or kayaking. Learn the art of surfing at the best beach in Puerto Rico, paddle the mangrove ecosystems or snorkel Isla Verde's nature reserve coral reef.read more 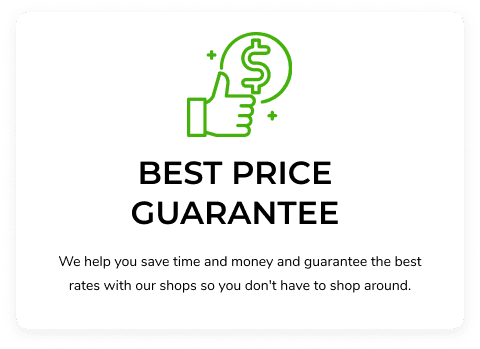 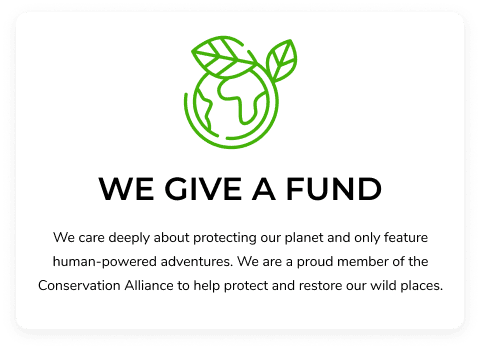 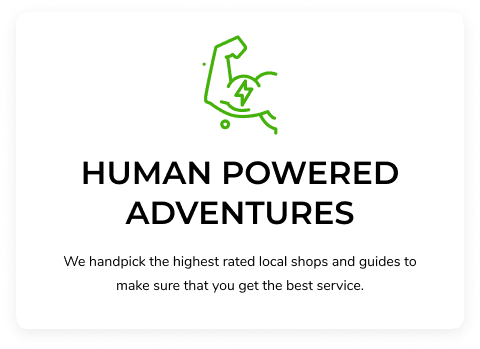 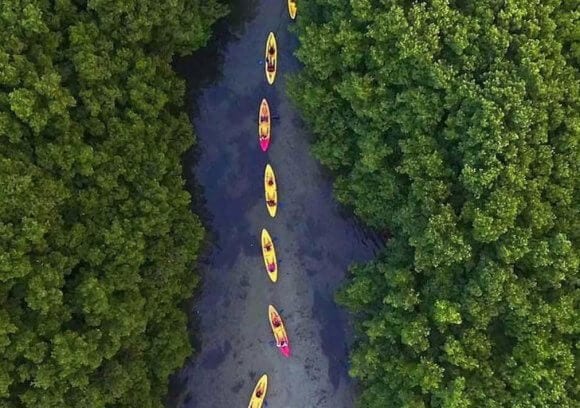 Experience two of the greatest natural attractions in Puerto Rico, all in one day with Island Journey's El Yunque Rainforest & Bio Bay Combo Tour. This tour includes round-trip transportation, a fully guided rainforest tour, and the world-famous Bio Bay Kayak Tour. Swim in natural pools, refresh in the waterfalls, slide down an exhilarating waterslide, rope swing into the river, and kayak between gorgeous rock formations.read more 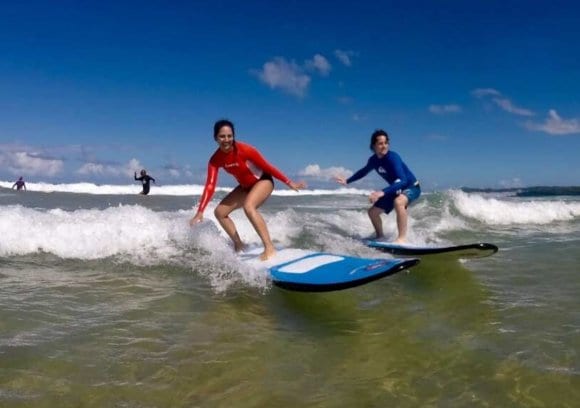 Ever dreamed of learning to surf in the Caribbean? Puerto Rico is the preferred destination for surfers in the Caribbean. The Island boasts world-class waves, a sunny tropical climate and beautiful beaches. Surfing Puerto Rico's surfing instructors will encourage and guide you through your surfing lessons. For surfing lessons in Puerto Rico, the place to be is La Pared Beach, just 45 minutes from San Juan. read more 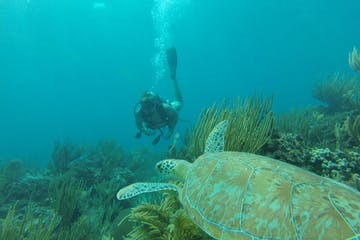 Explore Puerto Rico's coral reefs and abundant sea life with Casa del Mar & Aqua Adventure! They will help you explore with dives and snorkeling adventures near the most pristine Puerto Rican beaches, like Fajardo, and Culebra Island.read more 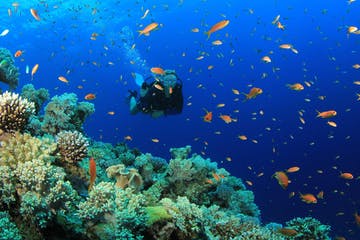 Paradise is the only way to explain the magnificent underwater environment we experience diving and snorkeling in Puerto Rico. Join Paradise Scuba & Snorkeling Center in La Parguera to snorkel some of the best shallow reefs in Puerto Rico, swim in the bioluminescent bay, scuba dive The Wall in La Parguera or discover scuba diving with a beginner dive or PADI certification course!read more 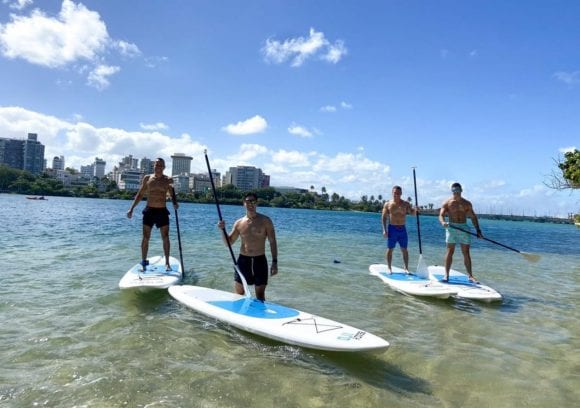 Discover the beauty of the Condado Lagoon Natural Reserve in San Juan with VIP Adventures. Kayak or SUP the mangroves and marshlands of the lagoon looking for manatees that feed on the seagrass. Or explore the underwater ecosystem with a snorkeling adventure to observe coral reefs and marine life up close in this natural reserve. This is the perfect spot to relax and enjoy nature right in the capital of Puerto Rico. read more 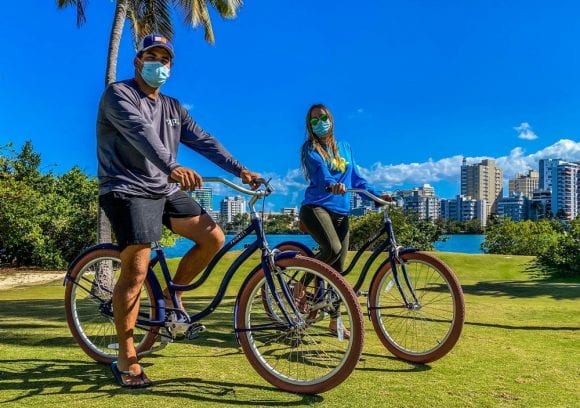 Bicycling is a great way to explore Condado and Old San Juan. VIP Adventures has lightweight, comfort bikes for rent by the hour or the day! Visit the "Dos Hermanos" bridge, Escambron beach and explore the Luis Muños Rivera Park before discovering the extraordinary attractions in Old San Juan National Historic Site. Cycling San Juan is a fun activity for the entire family.read more 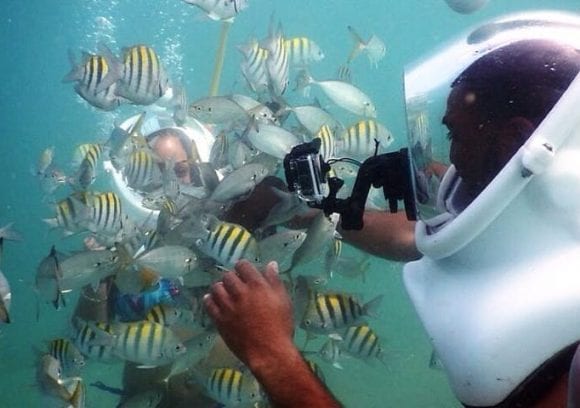 Whether you are vacationing in San Juan or on the eastern coast of Puerto Rico, whether you're a novice snorkeler or an experienced diver, Aqua Adventure has an underwater adventure for you.read more 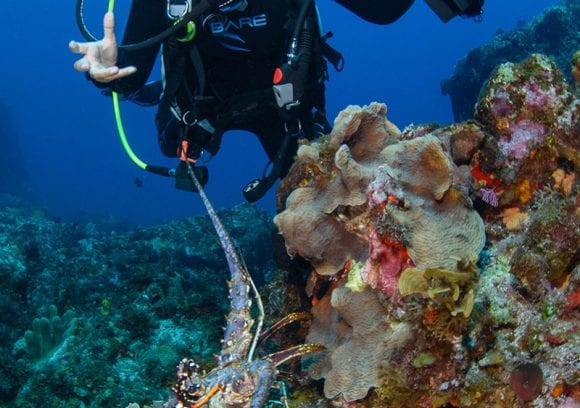 Pure Adventure welcomes divers, snorkelers and kayakers to Fajardo, Puerto Rico! They will take you to stunning beaches with crystal clear waters for snorkeling and diving, or secluded, hidden-away bird sanctuaries in mangrove lined lagoons. And for the truly adventurous, kayak the glowing waters of Bio Bay Laguna Grande or scuba dive off the coasts of Vieques and Culebra Islands. They have an exciting Puerto Rican adventure tour for everyone, regardless of age or skill level.read more 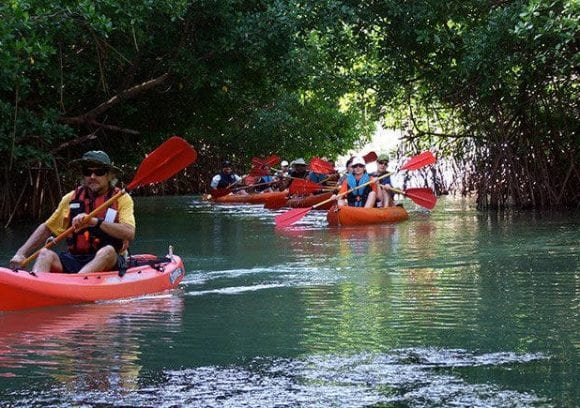 With Puerto Rico Bio Bay Tours, guests can discover the bioluminescent waters of Laguna Grande, explore the mangroves of Las Cabezas de San Juan Reserve and experience Las Croabas fishing village. Guests are brought into this one-of-a-kind ecosystem and guides are proud to share more than 20 years of experience and knowledge. read more 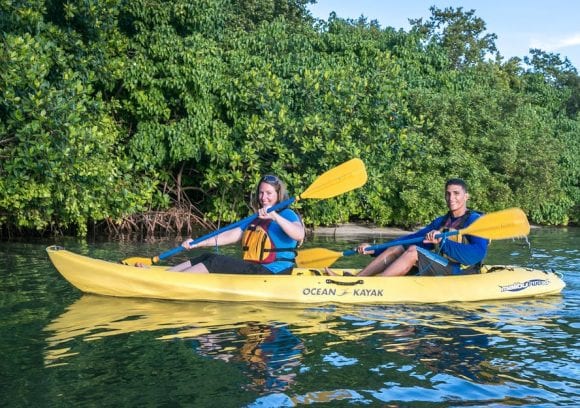 Puerto Rico Access Tours offers guided eco kayaking tours for you and your family in some of Puerto Rico's most stunning destinations. Tours endorsed by the Puerto Rico Tourism and the Department of Natural and Environmental Resources of Puerto Rico include the Bio Bay Night Kayaking Tour, Rainforest Tour, and many others. Come see all that Puerto Rico has to offer!read more 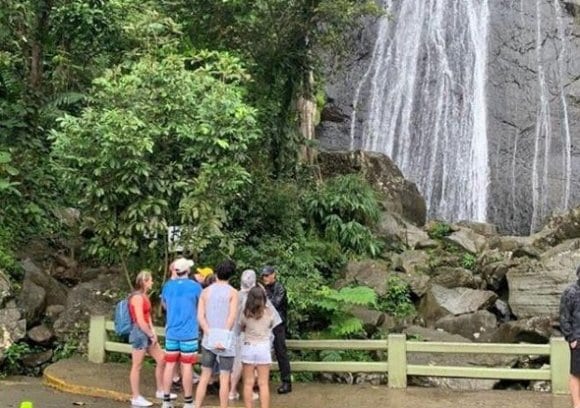 Puerto Rico Access Tours offers guided eco tours in El Yunque National Forest, the only rainforest in the U.S. National Forest System. Our guide takes you on an unforgettable hike followed by a refreshing swim. Visit waterfalls and rock formations under the forest canopy as well as panoramic views of the coast above the canopy.read more 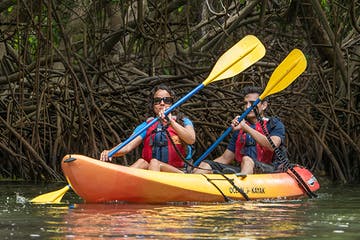 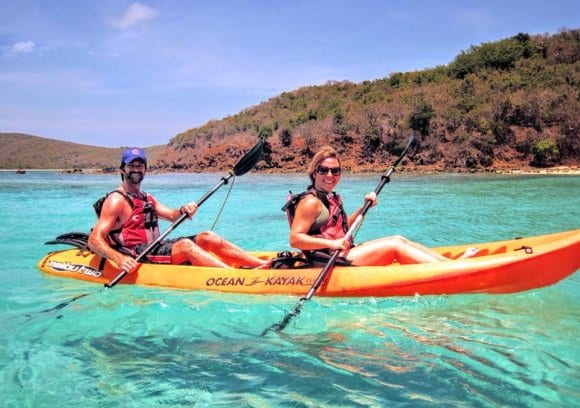 Puerto Rico is one of the few places on the planet where bioluminescence occurs. Take an eco-friendly kayak trip to the Bio Bay, or visit the white sand beaches of a tropical island by kayak, and snorkel with turtles and vibrant coral gardens.read more 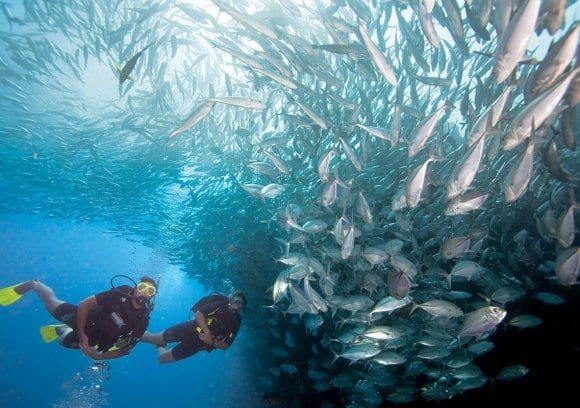 Snorkeling and scuba diving in the Tres Palmas Marine Reserve in Rincon is fun, safe, and easy for everyone to enjoy.  You will be amazed at the underwater world that lives just steps from the beautiful beaches of Rincon!read more

FROM$62 per 2.5 hrs
PR - Lajas
Is this your business?
Request Booking

Things to Do in Puerto Rico

Puerto Rico is a Caribbean island and has been a territory of the US since 1898. From the world’s brightest bioluminescent bays to the El Yunque tropical rainforest, Puerto Rico is all about its tropical beaches, waterfalls, mountains, and the many outdoor activities that it has to offer. Kayaking, snorkeling, SUP, and taking tours of the beautiful rainforest and Bio Bay are some of the many outdoor activities that attract adventurers to Puerto Rico. Bioluminescent tours in Puerto Rico are offered at Mosquito Bay in Vieques, Laguna Grande in the northeast in Fajardo, and La Parguera in the south-west in Lajas.

The world has just five bioluminescent bays with concentrations of bioluminescence high enough to be readily seen. Three of these bioluminescent bays are located on the island of Puerto Rico, so they are a big draw for visitors. Mosquito Bay is situated in Vieques, Laguna Grande lies in the north-east in Fajardo, and La Parguera can be discovered in the south-west in Lajas.

Kayaking, snorkeling and scuba diving in Puerto Rico allows adventurers to experience the island’s mangroves, rivers, marine life, and, above everything else, its bioluminescent bays. There are many places to explore Puerto Rico’s beautiful waters – here are some of our top recommendations.

Fajardo is a region in eastern Puerto Rico and is home to one of the five bio bays in the world, the Laguna Grande bioluminescent bay. The crystal clear water makes it an ideal location for kayaking and snorkeling, especially at night to experience the bioluminescence. The Fajardo bio bay tour is an incredible adventure. It takes you through the mangrove forests and lets you experience the spectacular “sparkling in the dark” bioluminescent water, also known as the Bio Bay.

San Juan is the capital of Puerto Rico and is situated on the Atlantic Ocean, on the northern coast of the island. It is quite a popular destination for water sports like snorkeling and scuba diving. Its rugged shorelines, underwater views, lush mountains, and amazing marine wildlife including orcas, seals, eagles, sea lions, make it the experience of a lifetime.  Some top spots for snorkeling and scuba diving are Condado lagoon and Isla Verde Beach.

Rincon has some awesome snorkeling sites, but one of the most incredible spots is the Tres Palmas Marine Reserve.  The reserve was created in 2004 to protect the extensive coral and the surf that breaks over them.  The reserve features beautiful sandy beaches and rich underwater biodiversity perfect for snorkeling and scuba diving.  Fish that inhabit this underwater paradise include parrotfish, blue tangs, hogfish, squirrelfish, butterfly fish, and angelfish. You may also see the occasional stingray, tarpon and turtle swim by to check you out. Look in the crevices for eels, crabs and lobsters.

Kayaking Puerto Rico offers a Culebra kayak tour that takes you from Tamarindo beach to Flamenco beach. You will kayak through turquoise water and craggy shorelines to the world-famous Flamenco Beach.  Enjoy 2 sessions of snorkeling at the Luis Peña Reserve. Watch the turtles swimming along with you while you snorkel through the beautiful coral gardens.

How to Get to Puerto Rico

By Flight: The island’s international gateway is the Luis Muñoz Marín International Airport in San Juan (SJU). Also, the regional airports at Aguadilla (on the northwestern coast), Ponce (on the southern coast), and Mayaguez (on the western coast)  also have direct flights from the US mainland.

By Water: Puerto Rico’s ferry services connect with the US Virgin Islands and the Dominican Republic. These are also one of the popular ways to get into Puerto Rico.

The best time to visit Puerto Rico is from mid-April to June, just after the peak tourist season that goes from December to April and just before the rainy summer. The spring weather is also very comfortable, with most days only reaching the mid-80s. If you want to witness bioluminescent kayaking in Puerto Rico in its full glory, then plan a visit on a full moon night.