Close
Best Price Guarantee - Book with us, and we promise you'll get the lowest price available online. 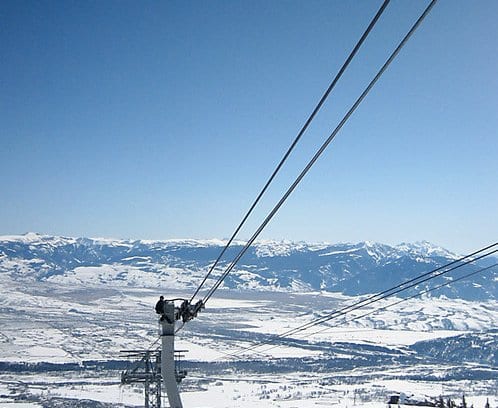 With Black Tie Ski Rentals’ delivery service, you can book top-of-the-line ski and snowboard gear before you arrive, and relax as your equipment is delivered right to your Jackson Hole accommodation. Save 10% by booking on TripOutside!read more

With an annual snowfall average of 500 inches, pow days in Jackson Hole are raved about. Jackson Hole is known to have some of the most challenging, expert terrain in the world. Skiing in Jackson Hole begins with an epic ride on the Aerial Tram. Almost 2500 acres of skiable terrain and 193 runs cater to skiers of every skill level. Blue trails make up 40% of the terrain, while 50% is all about the black diamonds and double black diamond runs. Jackson Hole is known for its ‘cowboy powder’ and its vast, uncrowded terrain means there’s fresh pow for skiers most days. The resort boasts a staggering vertical drop of 4139 feet – the highest in the country. For beginner terrain, Snow King is a great option. Beginners and newer intermediate skiers will find laid-back runs at Snow King, and close proximity to the city of Jackson. Grand Targhee is on the western side of the Tetons, just a 90-minute drive from Jackson Hole airport. This resort is legendary for its incredible powder and lack of lift lines.

These mountains aren’t limited to downhill skiing and snowboarding – Grand Teton National Park, Yellowstone National Park, and the National Elk Refuge are all nearby and feature-rich wildlife, geysers, snowshoeing tours, and cross country skiing. Teton Village and Jackson are riddled with some fantastic apres-ski spots where you can end a ski day with locally-brewed beer and scrumptious meals.

Jackson Hole in the summer reveals towering mountains, remote and rugged valleys, and hundreds of biking and hiking trails stretching for many miles. The crown jewel of the area, Grand Teton National Park, features over 200 miles of hiking trails, fantastic paddling options in its many pristine alpine lakes and the renowned Snake River, and spectacular wildlife sighting options.

A superb location for all ski levels, Jackson Hole Mountain Resort features 2,500 acres of skiable terrain on two mountains and is known for steep skiing and gorgeous scenery with 4,139 feet of vertical drop. The ski resort receives an average of 459 inches of snowfall each year and boasts a summit elevation of 10,450 feet. Jackson Hole Mountain Resort may be notorious for extreme terrain like Corbet’s Couloir, but they also cater to intermediate and beginner skiers with groomed terrain accessed off of most lifts and feature endless playgrounds for kids to explore that will make this the perfect ski destination for your entire family.

Nearby Snow King resort in Jackson Hole’s “hometown ski hill.” With 400 acres of skiable terrain over 32 named runs, it boasts the steepest racing course in the lower 48. Snow King also features ample blues and greens for intermediate and beginner skiers, the famous King Tubes Park, and Cowboy Coaster that runs all winter.